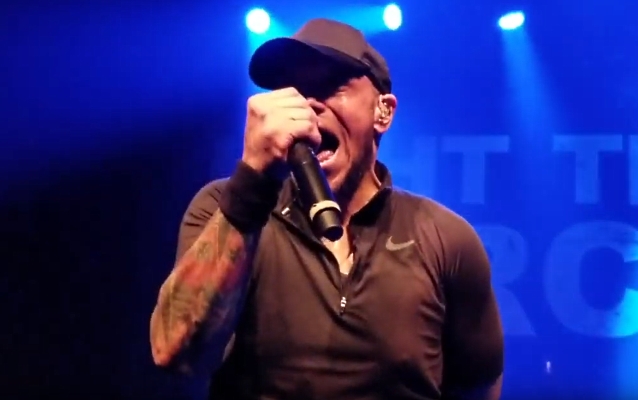 Former KILLSWITCH ENGAGE singer Howard Jones made a surprise appearance during the band's concert on July 8 at Festival d'été de Québec in Quebec City, Canada, dueting with current KILLSWITCH frontman Jesse Leach on the group's classic song "The End Of Heartache". Fan-filmed video footage of the performance can be seen below.

Leach appeared on KILLSWITCH's self-titled debut and sophomore album, "Alive Or Just Breathing", before exiting the band. Jones took over on vocals for "The End of Heartache", "As Daylight Dies" and the 2009 self-titled set before being dismissed from the group seven years ago.

Jones is currently the frontman of LIGHT THE TORCH, which released its debut album, "Revival", after issuing two efforts under its previous name, DEVIL YOU KNOW.

Last year, Howard recorded a guest appearance on a new KILLSWITCH track, to be included on the band's next album, "Atonement", due in August. Leach revealed that he wrote the lyrics to the track "with Howard in mind and our connection through our similar mental illnesses." He explained: "I mean, now that I've hung with this guy a few times, it's 'crazy' (pun intended) how similar we are. We are brothers in metal, anxiety, hardcore music, love of medicinal marijuana and fighting depression.

"We may be very different-sounding voices, but, in truth, we are similar in many ways in our minds," he added.

Jesse went on to say that the song's lyrics are "about keeping hope in dark times and helping out those in need."

Leach, who has previously blamed his exit from KILLSWITCH in 2002 on his battle with depression, said that he planned "on using this song to help continue to raise awareness for mental health and suicide prevention. Both Howard and I have a very strong outspoken stance on the subject and I will use this to help with the cause," he said.